Victoria, B.C. (September 11, 2014): On September 10th, two women rushed a pro-life club table at the University of Victoria, snatching the fetal models on display and dumping used cat litter all over the table. Youth Protecting Youth (YPY) was participating in the university’s Clubs Days event and had a recruitment table to sign up new members and engage with other students on the pro-life issues. 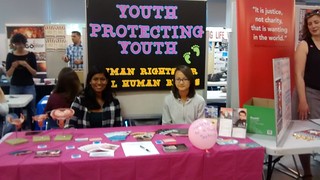 Although the fetal models were recovered, club members arrived back this morning to find that the vandals had broken into the closed clubs room and that more filthy litter had been dumped on the table and the fetal models – valued at several hundred dollars – had been stolen.

“This kind of behaviour calls into question whether UVic is an environment where people can express their opinions and beliefs without such disrespectful opposition,” stated Adrian, co-president of the club. “Other clubs and the student body need to be reminded that this kind of criminal behaviour has no place on a Canadian university campus.”

After speaking with campus security, club members made a police report with local authorities. 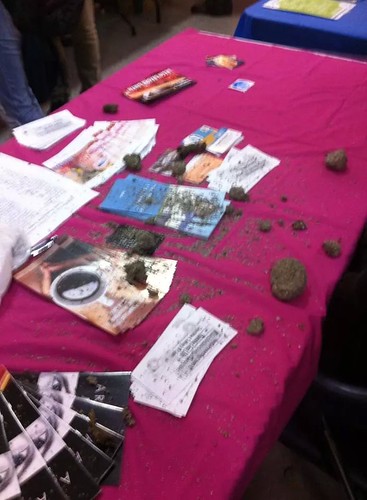 The club demanded that the University of Victoria Student Society (UVSS) formally condemn the actions of the vandals, and the UVSS has agreed to issue a statement doing so.

“In previous years the UVSS has attempted to ban and censure the club and was sued by the club in 2010,” stated Anastasia Pearse, Western Campus Coordinator for National Campus Life Network, a national organization that supports pro-life students. “It’s reassuring to see that student society representatives were helpful and apologetic in the wake of this incident and we look forward to a strong statement from the UVSS condemning this theft and vandalism.”

“This incident has not prevented us from continuing our outreach,” commented Kimberley Van Der Pijl, who witnessed yesterday’s attack and serves as co-president of the club. “We’ve had very positive conversations with so many students and many have signed up for the club.”
The members of YPY hope that the fetal models will be recovered, and that students who disagree with their message will learn to voice their disagreement in a mature, respectful manner.

The Martlet | Hot debate on campus.

If you’re on campus today or tomorrow, you may see YPY members standing with signs displaying images of aborted babies, as well as images of healthy developing preborn babies. More information about the project, “Choice” Chain, is available on the CCBR website.

If someone you cared about believed a lie, what would you do? Would you let them go on believing that lie, even if it was the cover up of the deaths of your fellow human beings, or would you tell them the truth, and face the hostility that might cause? What would you want someone to do for you? Would you rather believe a lie, or have someone love you enough to tell you the truth, even if the truth was shocking and perhaps overwhelming?

Why are we doing this? Why are we standing outside with images that we know are disturbing to look at? Ultimately, because we care about you. We care enough to tell you the truth, even though this truth is one that’s easier to ignore. The truth is that when we talk about “choice” in the context of abortion, we are talking about the choice to kill a human being. This is a choice that ends the lives of around three hundred preborn babies every day in Canada. The idea that abortion is in any way justice is a lie. We hope that you will feel comfortable coming to talk with us about the truth.

Simon Fraser Lifeline, the pro-life club at Simon Fraser University, stood up for the rights of the pre-born and their own right to freedom of expression this week as they brought the Genocide Awareness Project to campus. Monday’s press release can be read here. The event took place peacefully and sparked many discussions with passing students. We applaud SFU Lifeline for their steadfastness and hard work.

Update: A report on the results of the display: http://www.unmaskingchoice.ca/blog/2011/11/09/changed-hearts-and-minds-simon-fraser-university

You may remember that on October 4, 2010, pro-life students at Carleton University were arrested while trying to set up the Genocide Awareness Project display on their campus, and charged with trespassing. Video can be found here: http://www.youtube.com/watch?v=XeJkBQn1-r8

Carleton Lifeline has just announced that the trespass charges have been dropped. Their press release can be found here:

We congratulate the members of Carleton Lifeline for their continued courage and perseverance, and are thankful that these unfounded charges have been dropped.

Youth Protecting Youth, having experienced discriminatory treatment from the University of Victoria’s Student Society in the past and present, stands in solidarity with Carleton Lifeline and other pro-life clubs on campuses across Canada, as we are all seeking to share this unpopular message that life should be protected from conception to natural death. For the full press release from Carleton Lifeline, visit their blog here.

In October of 2010 we hosted Jose Ruba of CCBR, who gave the presentation, “Echoes of the Holocaust.” The UVic Students’ Society Board of Directors has now voted in favour of a motion that will censure YPY for hosting the event because they allege that our actions contravened the club harassment policy. YPY is specifically being reprimanded for advertising the event in such a way that it “misled” students, and allegedly harassed them as it compared abortion to the Holocaust. There seemed to be little consensus at the UVSS board meeting as to whether harassment had actually occurred: many board members seemed to think that since people had been upset, something needed to be done to deal with YPY, whether or not we had actually broken any rules.

Whereas a Complaints Committee was struck in response to complaints received regarding an event called “Echos of the Holocaust” hosted by the club Youth Protecting Youth; and

Whereas the complaints committee investigated several different complaints; and

Whereas by hosting an event “Echos of the Holocaust” Youth Protecting Youth allowed for people to be misled about the nature of the event and the Complaints Committee deems this to be in violation of the harassment policy, clubs policy part 2; and

Whereas significant concerns were raised by students about off the conduct of campus groups such as, “The Canadian Center for Bioethical Reform”; and

Whereas the UVSS would like to find long lasting, proactive solutions to reoccurring issues; therefore,

BIRT the UVSS investigate the possibility of mediating with Youth Protecting Youth to help prevent further issues; and

BIFRT legal counsel be consulted to investigate if there can be changes to policy that would address concerns around the conduct of off campus groups or speakers.

We hosted the presentation because we believe we continue to experience “echoes of the Holocaust” today. Just as the Holocaust and past genocides are characterized by their unjust denial of personhood to a group of human beings and their systematic destruction of this group, so too do we see denial of personhood and systematic destruction with abortion in our society – the group targeted is the unborn. In two previous blog posts we addressed this comparison and the false accusations made about the event.

Yes, we knew that some people would be offended by the presentation. But what are we supposed to do? Stay quiet to avoid offending some people, while we silently watch 100,000 Canadians die every year because of abortion?

Let us remember that feeling offended and emotionally upset because one disagrees with a viewpoint does not mean one is being harassed. After all, no one has a legal right to be free from offense. Students who see and dislike our posters are not being subjected to a “hostile, intimidating, threatening or humiliating environment.[i]” The Clubs Harassment Policy states that harassment is defined as “treatment” of a person. If merely expressing our beliefs in advertising constituted “treating” people in a harassing manner, then no one would be able to express his or her views without fear of censure.

We are truly sorry that some people felt emotional or upset when they saw our posters. But abortion is emotionally upsetting. We do not want any woman or child to be hurt by abortion, and therefore want to provide students with as much information as possible so they can choose life-affirming options for themselves and their unborn children. This presentation was one way to express these beliefs.

The presentation did not pose a threat to anyone who attended; we are all adults capable of choosing for ourselves what we want to believe, and this presentation did not force anyone to do anything. We simply stated that genocide is horrible, the Holocaust was horrible, and we see that abortion is horrible because like the Holocaust and other widely recognized genocides, it involves the denial of personhood to and subsequent killing of innocent human beings. We wish none of these things ever happened, and we want to better uphold the dignity and value of every human being, born or unborn.

It is unfortunate that the UVSS Board of Directors has chosen to censure YPY and thinks it is necessary to mediate with us and host a restorative justice event. Although we welcome and encourage dialogue on the abortion issue, we have not harassed anyone, and so the actions taken by the board are based on a false “guilty” verdict. In addition, we worry that a policy made to govern who can and cannot speak on campus wouldn’t be applied equally to all clubs, and could be used to censor YPY.

The continued mistreatment of campus pro-life groups is still receiving much media attention, as can be seen in this recent MSN article. Nathalie Des Rosiers, general counsel for the Canadian Civil Liberties Association, cautions student unions that attempt to silence pro-life groups, as doing so sets a precedent for future debates. “When they’re approaching this issue, they should not diminish their responsibility toward ensuring that university campuses are places where ideas can circulate freely.”

Pro-Life Clubs at other Universities

Promote Your Page Too